I swear these books sales are just getting better and better. My library holds these book sales bi-yearly (do all libraries? Is this a library norm? I have a librarian best friend why do I not know these things), and of course I always hit the place up expecting not to find very much because I’m apparently under the impression I’ll already own whatever it is they’ll have. Don’t ask me why I think that, it’s not even remotely logical. Every time I go, though, I prove myself wrong all over again. This is what I picked up this time around!

This time I picked up a grand total of 16 books.

First up from the haul is Strykers by K.M. Ruiz, a nice hefty book about life after a nuclear war. It was the title that drew me in this time, but I’m happy to learn that there are some supernatural superpower superness to this one (cause of the nuclear war?) and that it’s not in a series. I have so many series books right now. Next is Wings by Aprilynne Pike, and this one is part of a series. I picked this one up because I vaguely remember having picked it up back when I was in high school, but I can’t for the life of me remember what exactly it was about, and therefore felt the need to own it and find out. Now I just need to track down the other three.

Next in line is a book I picked up because of the movie, and that is The Monuments Men by Robert M. Edsel. The fact it’s about something relating to World War II also helped, I’m fascinated by anything relating to the wars that involved the world (along with the Civil and Revolutionary wars of America’s), and if I had been a history major I probably would have focused on this in particular. Following that one is Dark Places by Gillian Flynn, which I shamelessly picked up because it was a steal at seventy-five cents and I had bought Gone Girl for fifteen dollars. I haven’t even read Gone Girl yet, but the cheapskate in me couldn’t resist the pull. Finally in this section is The Warrior Heir by Cinda Williams Chima. I’ve been meaning to pick up this series for a while now but have yet to, and figured this at least was a decent place to start since the book would be much cheaper there than at the actual book store. I’ll just have to go and pick up the others in the series at some point, probably once I actually start on it. I’ve heard great things about this series and I’m excited to get to it some day. 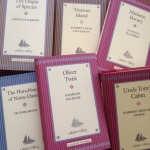 Next we have a collection of these adorable tiny books that I could NOT pass up. You can’t see it, but they have that gold edge to their papers that classics often have, but they’re in the itty bitty form. I figured since I didn’t already own any of these classics, now would be a good time to pick them up. I picked up The Origin of Species by Charles Darwin (which I have read multiple times and never owned, which is a strange paradox considering I’m an Anthropology major and should probably own at least five different copies by now), Treasure Island by Robert Louis Stevenson, Madame Bovary by Gustave Flaubert, The Hunchback of Notre-Dame by Victor Hugo, Oliver Twist by Charles Dickens, and Uncle Tom’s Cabin by Harriet Beecher Stowe.

And finally on the list are the first five books from the Left Behind series by Tim F. LaHaye. I’ve seen these books before on library shelves and debated picking them up, but knew I would be getting myself into a massive series I wasn’t ready for yet. Now, I own the first five and can jump in when I’m ready without having to worry about return dates.

And thus ends this Library Book Sale Haul! All have been added to my TBR Jar! (Which I have been slacking on, haha… ha…) Feel free to stick around if book hauls are your thing, I have more coming since I’ve gone so long without posting!

Find these books on Book Depository!