I don’t know about you but I have an obsession with coffee along with my book addiction, and putting them together just makes my whole day (or week, depending), but more often than not I have a hard time making my coffee both the way I like it to be (iced) and taste the way I like it to (not too bitter). Usually, I just use my Keurig machine and brew up a hot cup of coffee to dump over ice, which, unless I manage to randomly get it right, usually ends up less than desirable with a watery taste and a lack of flavor in the actual coffee. Then, when I was poking around Wiki the other day (Dandelion with Cry and Dodger over on YouTube had me looking up drinks like Americano and such just for the funsies), I learned that there’s actually a thing called “Cold-brewed” coffee, and it was actually easy to make!

The recipe I decided to follow can be found over here. It really is an extremely simple process, so tweaking it around doesn’t seem like too hard of a thing to do, now that I’ve done it the same almost exactly this first time. The only thing I ended up changing was the last part, with the coffee-to-water ratio, due to the fact I thought the original ratio was way too strong for me. 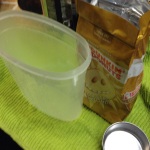 I didn’t feel like grinding up my own ground coffee with the coffee grinder we have, so I just used up some Dunkin’ Donuts ground coffee that I hadn’t finished yet. It seemed to do the job just fine for me, but next time I’m going to try to use an unflavored coffee to see how the cold-brew coffee tastes alone. 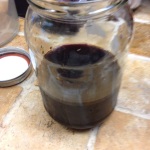 From there I added the appropriate amount of water to the grounds, let it sit for 12 hours and brew, then stuck it in the fridge to chill for 4 hours instead of the listed 2 since I ended up forgetting about it by accident. Then, I strained it using a French press (but you can use a filter if you prefer, I just used what he had on hand), and dumped the contents into a mason jar for storage. Don’t let the small amount fool you–that’s all concentrated and strong as hell.

Instead of using the half-half ratio that it suggests using, I used 1:3 ratio of coffee concentrate to water and added ice as I pleased, and I like a lot of ice in my coffee. I think it’s because I live in Florida and ice has such a short lifespan in this weather. Anyway, lots of ice. From there, I added in half & half and a simple syrup that I got in the alcohol and drink mixes section at Walmart, because it was cheaper than buying the kind that they sell at coffee places and it’s the exact same thing.

My final verdict: Pretty good! It definitely didn’t have the same watery taste as it usually does when I make it from hot-brewed coffee, but it also had a different bitterness to it than regular coffee has, and I think I’m going to have to get used to the different taste, but coffee is coffee and I’d rather have a new kind to get used to than none at all. I’ll definitely be trying this again once the amount I just made is used up!

If you have any tips or suggestions for the next time I try this, let me know! Thanks for reading!