This month I read seven books. Seven. I’m blowing my own mind right now, it’s been years since I’ve read that many.

Holy crap, here’s the wrap-up for this month.

The first book I read this month was The Merciless by Danielle Vega. I intended to read this for the month of Halloween (and, after reading it, really wish I had), but I had run out of time and read it a couple days after the holiday had passed instead. This was such a weird and creepy book, and I won’t be saying too much about it here, but if you want to read more about what I thought, I did a review on it that can be found here.

The next two books I read were part of a series, The Jenna Fox Chronicles by Mary E. Pearson. Again, I won’t say a whole lot about these since I will be doing a review on the series as a whole later on, but they were really interesting!

The book I read next was The Accident Season by Moïra Fowley-Doyle (yes, I copied her name from Goodreads because I can’t do the umlaut on my keyboard), and I was… mixed about this one. I only gave it three stars because, while it wasn’t horrible, it wasn’t anything like what I thought it was going to be about. It wasn’t fantastical enough for me and read too close to contemporary for me to really enjoy it fully, not when I had been excited for something closer to fiction.

Fifth on my read list is Glass Houses by Rachel Caine, which I also gave three stars. I’m much more intrigued by this series, despite the fact I gave it three stars. While this first book might not quite have done it for me enough to warrent a fourth star (though, it did come close), I do plan on continuing this series into the new year. My library has all of them on ebook, so there’s nothing stopping me from doing so. 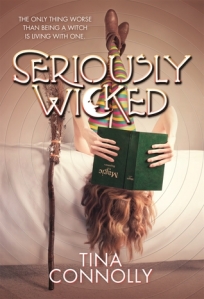 The next book I managed to knock out is Seriously Wicked by Tina Connolly. I powered through this one in about a day and a half, so it’s a pretty fast read, but if you want details on what I thought of it, you’ll have to stay tuned for the review that’ll be coming. 😉

Seventh (SEVENTH!) on the list of books I read this month is possibly my favorite read of the whole month, and that is A Death-Struck Year by Makiia Lucier. This is a historical fiction novel about the Spanish Influenza outbreak of 1918, and it’s exactly the kind of historical fiction novel that I can’t get enough of. This one will also be getting a review at some point, so if you’re interested in knowing what I thought of it, please stick around! If you don’t plan on reading the review but are interested in the book or like historical fiction, I highly suggest this book.

And that’s all for this wrap-up! Since I only need to read two more books this year, I’ll probably get them knocked out in between a reading marathon I plan on doing with my friend during December. You’ll find out in a few days what that marathon is! It shouldn’t be too surprising, honestly.

Anyway, thanks for reading!

Find these books on Book Depository! (Free shipping, and clicking the links helps me out!)

The Merciless || The Jenna Fox Chronicles || The Accident Season