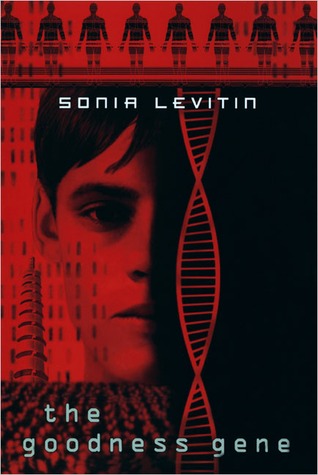 This definitely read like an older dystopian novel to me, with a lot of the elements you tend to find in today’s dystopian novels glanced over or not mentioned at all. That wasn’t necessarily a bad thing, but I wish I could have gotten a little more in-depth with the destruction of the former world and the “collapse” that happened before The Goodness was what everyone believed in. I know it wasn’t absolutely crucial to the story, but I’m curious all the same.

The world-building, too, left a little to be desired. I know it’s America, and they definitely name-drop with states and such as we go so we can get somewhat of an idea where Will is, but something about their world was missing. I couldn’t quite put my finger on it as I read, but their whole world definitely seemed much more fabricated. There wasn’t a whole lot to explain what was going on in Will’s world, aside from the constant mention of the Symsex. (Which, yeah, was kind of annoying after a while. It’s really a bigger centerpiece to a lot of the story than it needed to be, the idea of sex on a whole. Then again, this is about genetics, so maybe it was necessary after all. It still rubbed me the wrong way on occasion.)

My final issue was with the ending. It was so… brushed off, for lack of a better set of words at the moment. I wanted more. I was wholly unsatisfied with the prologue, and that’s what almost knocked this book down to a tw0-star rating for me. In the end, it retained the three stars, but only because the idea behind the book fascinated me so much.

The whole idea of Will and Berk behind genetic clones of Hitler is amazing to me. Hayli wanted someone with Hitler’s disposition and eloquence so that when the boy would come to power (and subsequently, get his brain meshed with Hayli’s so that Hayli may live on forever and also have the added brilliance of Hitler in his mind), he would be able to rule The Dominion with the inherent power Hitler managed to. Hitler was a horrible, horrible man, but he could command crowds of people in astonishing ways.

It makes me wish, again, that there was more to this. I know it might have pulled the book in a direction it didn’t need to be, but what if others were cloned? The idea of there being other boys out there with the DNA of people like Genghis Khan and Augustus and (horror upon horror) Caligula, and then seeing how they develop and grow. How much of their initial personalities would stay?

The idea really is so interesting to me, but God forbid it ever actually becomes a thing. I wouldn’t mind reading more stories based around this whole idea, though.

And that’s the end of that, at least for now.

One thought on “The Goodness Gene by Sonia Levitin | Review & Discussion”