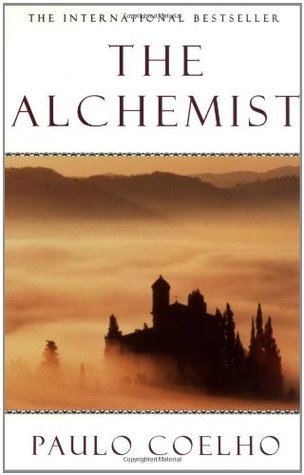 A Fable About Following Your Dream

Paulo Coelho’s enchanting novel has inspired a devoted following around the world, and this tenth anniversary edition, with a new introduction from the author, will only increase that following. This story, dazzling in its powerful simplicity and inspiring wisdom, is about an Andalusian shepherd boy named Santiago who travels from his homeland in Spain to the Egyptian desert in search of a treasure buried in the Pyramids. Along the way he meets a Gypsy woman, a man who calls himself king, and an alchemist, all of whom point Santiago in the direction of his quest. No one knows what the treasure is, or if Santiago will be able to surmount the obstacles along the way. But what starts out as a journey to find worldly goods turns into a discovery of the treasures found within. Lush, evocative, and deeply humane, the story of Santiago is an eternal testament to the transforming power of our dreams and the importance of listening to our hearts.

It was a really quick and easy read, despite how long it took me to finish it. It is a little difficult to get into if you’re not used to the kind of prose it uses, but once you can managed to get in the zone that the book requires, the pages pretty much fly. I wouldn’t recommend this to someone who doesn’t enjoy the types of books you typically have to read for a literature class, because this definitely reads like something you’d be required to read for something like that. Not that that’s a bad thing, but if you’re not one for that type, I wouldn’t go for a book like this. That being said, it is a little bit easier to understand and decipher than some of the books I’ve read before for classes like that.

I really enjoyed the different settings I was given in the book. All of it was set in Spain and Africa (Egypt, specifically), but there were various different settings within the areas that the boy traveled. My personal favorites were the crystal merchant and the Englishman, though I couldn’t exactly tell you why those were my two favorites out of all of the different settings. It was nice that he had to travel in such different ways to get what it was he was after, instead of going to Egypt and immediately finding another clue. It may have dragged at points because of this, but I appreciated being given a chance to know the other characters, minor as they may have been.

I do wonder what happened with the girl that the boy had been infatuated with in the beginning. Once she’s gone from the picture, you don’t hear about her again. I wouldn’t mind knowing what had become of her.

Overall, not a disappointing read, but not really one I’d come back to to reread.

One thought on “The Alchemist by Paulo Coelho | Review”