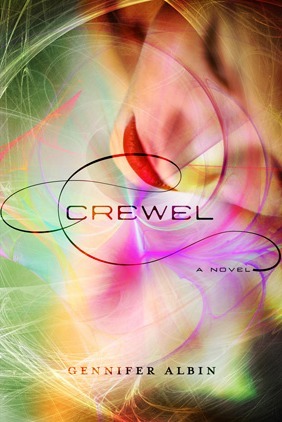 I wasn’t really sure what to expect when I went into Crewel as blindly as I did (all I knew was that it was dystopian), but the world I was given wasn’t quite it. Thankfully, I really enjoyed the surprises I was given as I read the book and learned about the world. People who weave time and manipulate matter? It really is a cool concept!

The main character, Adelice Lewys (who I was constantly getting Alice vibes from because of her name; IE Alice Liddell/Lewis Carroll — intentional? Most likely.), was not too bad of a main character, in my opinion. There were times when I wanted to sit her down and go all “ho don’t do it” on her, and other times where she exhibited emotions that fit so well with her age that I was impressed with the author for not making her act older than she actually was. I wasn’t thrilled with the whole romance bit, as side-story as it was, but I expected it the moment they introduced the boys. Her reasoning for figuring out a big secret, though? Pretty dumb. That was honestly the only time I set the book aside to go, “Wtf was the author thinking with that?” It was pretty bad. I’d explain, but, spoilers. I’m sure if you’ve read it, you have an idea of what I mean.

The world that this is set in, however, is a really cool concept in itself, too. I can’t exactly give a good explanation about what I mean or about the world, exactly, because doing so would probably cross over into spoiler territory, and it’s really better to dive into the book and learn about the world yourself as you go, and then lose that understanding in new information as you learn along with Adelice just what is up with the world she lives in and is now expected to help keep in control with her weaving.

I didn’t QUITE understand what was going on in the end there, and did have to scrounge around for context clues and such to figure it out, but I’m pretty excited to read the next one and see what’s going to be happening. I really have no idea where it’s going to go from here, exactly, because of what their world is.