These reviews are spoiler-free! 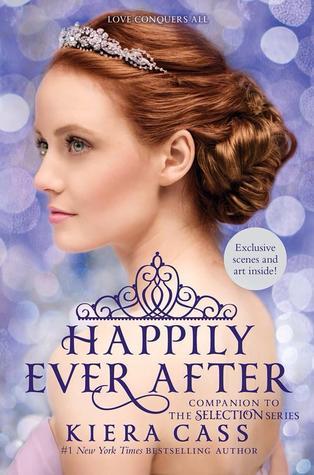 Since this is a bind-up of the novellas, I’m going to rate and review each one separately, along with my rating for them overall, like above.

I know this one got some very mixed reviews, but honestly? I can understand how it happened. These things actually do happen (not to this scale, obviously, since we don’t have princes left and right throwing selections), and I felt like this story more threw the idea into light, about how it could still happen even in royalty, rather than condone the relationship showed in the story. I really enjoyed seeing things from Amberly’s POV and Clarkson as a teenager, and I kind of wish I could see more of it despite how that specific selection ended up going. It’s clear from the main books that Clarkson really does have some form of affection for his wife, and it shows that Amberly isn’t quite the person she’s portrayed as in the original series. Despite realizing she’s not as great or strong of a person I thought she was, I still thought it was a good look into her character.

I was a little mixed on this one. I enjoyed seeing things from Maxon’s point of view, but at the same time I felt like we weren’t really being given that much to look at. Maybe because it was clearer that Maxon wore his heart on his sleeve, even in America’s perspective, but it wasn’t as interesting to me to see things from Maxon’s side, even though I adore Maxon more than anyone in the series.

That being said … I think I’d like to read the entire series from Maxon’s point of view. I want more of the scenes from his mind, so we can see the things that happened where America couldn’t see.

Maybe we could get that, one day? Hint, hint, Cass?

I was so mixed about this one, because I still am not a fan of Aspen. I’ll admit, after reading this novella from his point of view, I did start to understand his reasoning for things a lot better, but I still just didn’t like the guy very much. That might be because it’s a love triangle, and I always dislike one of the people in the triangle no matter what (Gale, Mal, Nick…). I don’t always hate them, I actually rarely do, but there’s always a hint of “go away pls” in my mind when the disliked third of the triangle shows up, and that was constant with Aspen.

I did enjoy the parts where he was off finding his own love, though I feel like they could have had a little more flesh to them, especially since this was him getting away from his feelings for America.

All in all, pretty meh on this one.

My favorite out of the collection, I loved seeing the story behind Marlee and Carter, and I almost wish they had been given more than just a flimsy novella to tell their whole story. I know it wasn’t that much of a story, but, still. I really loved seeing theirs, and when Maxon was thrown into the mix to be their savior, it easily became my favorite over the other stories.

I feel like Maxon, of most of the things he did, handled this situation really well. He may have floundered and blundered in many other areas while courting America and trying to ruin his whole future with Celeste by his side instead, but when it came to some seriously princely deeds, he went all the way. Still my favorite character, can you tell?

And thus ends my review of Happily Ever After. I do like being able to read novellas in bind-ups, but sometimes I want more from the novellas after the fact, and I can only hope they’ll be expanded on one day. (Come on, Maxon. Give me more of your POV.)

One thought on “Happily Ever After by Kiera Cass | Review”