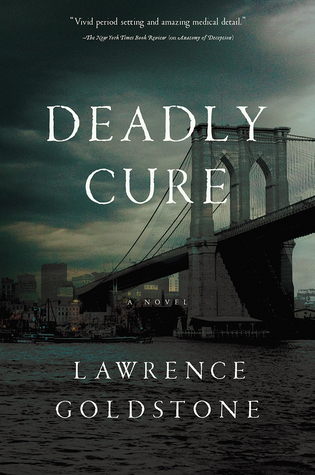 This book was received from Netgalley for review.

In 1899, in Brooklyn, New York, Dr. Noah Whitestone is called urgently to his wealthy neighbor’s house to treat a five-year-old boy with a shocking set of symptoms. When the child dies suddenly later that night, Noah is accused by the boy’s regular physician—the powerful and politically connected Dr. Arnold Frias—of prescribing a lethal dose of laudanum.

To prove his innocence, Noah must investigate the murder—for it must be murder—and confront the man whom he is convinced is the real killer. His investigation leads him to a reporter for a muckraking magazine and a beautiful radical editor who are convinced that a secret, experimental drug from Germany has caused the death of at least five local children, and possibly many more. By degrees, Noah is drawn into a dangerous world of drugs, criminals, and politics, which threatens not just his career but also his life.

This book was very reminiscent of A Death-Struck Year by Makiia Lucier [review], despite the fact they don’t take place during the same time period and they don’t surround the same issue. They do, however, both relate to medicine at the time periods they take place in, and I’m slowly finding out that this particular subject is something I’m super interested in. Historical Fiction centered around the medicine or illnesses of the time? So interesting to read about!

Like the synopsis above states, the book starts off in 1899 with a young doctor named Noah Whitestone who is called into the home of a child normally seen by another, older and more experienced, doctor. The child dies, and you’re left with Noah for the rest of the novel to find out who, what, and why, and it really is one hell of a journey you go on to get to the ends of things. Right up to the very last pages you’re left with at least one question to the murder, and it’s not until it all wraps up that you do finally find out everything you might have been wondering surrounding the child’s death when he first died at the start.

If you’re interested in medicine, especially medicine in Historical Fiction, or the era that the story takes place in, then I have to very highly recommend this book to you, because it really is a fascinating story. I have no medical background myself, so I had some trouble following a few of the terms as I went along, but it really wasn’t that much of a deal to understand everything else going on. It was extremely interesting reading about some parts where medicine as we know it today wasn’t discovered yet, such as when Noah mentions that blood types haven’t been discovered yet, but they’re starting to wonder if they might exist, and don’t know why the body rejects blood sometimes.

The only thing I really did not like about this book was a very unnecessary and brief romance Noah had with one of the ladies in the story. Not only was he already engaged when he met her, he was widowed previously and still risked his relationship with his fiancee for another woman that was just too gorgeous to pass up.

Really? Knocked it down a half-star for me. I felt it entirely unwarranted.

The rest of the book, though? So interesting and a lot of fun to sleuth through (even though I hadn’t figured hardly anything out myself–it was just fun to go along and watch Noah), and definitely a book I would love to add to my physical Historical Fiction collection.

One thought on “Deadly Cure by Lawrence Goldstone | Review”