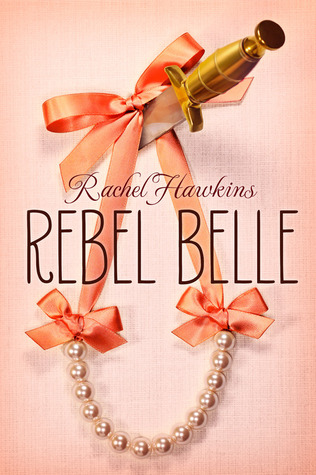 Whew, been a hot minute since I’ve done a book review, hasn’t it? And here I told myself I would try and do more in the new year. Nope!

But, hey. I’m reading way more books than I thought I would, so that’s a good enough reason for me to slack on the reviews. Anyway!

I read this and the other two books in the trilogy while I was in England this past week (and freezing my Floridian nuts off, holy crap) (but so worth it), so I do plan on writing reviews for the other two at some point. You know. Some point. For now, Rebel Belle!

It’s no secret that Rachel Hawkins is author to one of my favorite series, Hex Hall (all of the books can be found on my favorites shelf on Goodreads), but, despite this, I hadn’t actually bothered to give any of her other books a go until I was faced with a list of books I thought I wanted to read during my trip and decided, in indecisive bitch fashion, that I wanted to rebel against myself and read something else. And what was on the first page of my Libby app when I opened it in that fit of rebellion? Well, The Seven Husbands of Evelyn Hugo by Taylor Jenkins Reid, which I did read on the plane over, but also Rebel Belle! And now, here we are.

I just have to say that Hawkin’s writing style is the thing that always keeps me grounded in her stories, even when I feel like the plot is slipping or I’m losing interest otherwise. I wasn’t the biggest fan of any of the characters we were presented with, but the writing? I can’t wax enough lyrical about it, to be short. I love her writing style and it definitely is what kept me in the moment.

The characters weren’t horrible, though. My favorite was definitely our main character, Harper, even though she was outside of the kind of character I normally would latch onto. Despite being an overall pretty girly character attached to all things prestigious, I really loved seeing things from her POV. She didn’t flounce around on a lot of useless things like I had expected her to (useless to the story, not necessarily useless in general), and her hatemance with the other main character, David, was honestly a great ride for me. I love a good rivalry, it’s my favorite trope out there.

However, I do have to say I wasn’t a huge fan of some of the plot points we were given, and the story overall did feel a little flat to me. There were elements I didn’t see the point of (even as I went on in the series) and some things that weren’t expanded upon that I wished had been. I won’t say anything there, because that’s spoiler territory, but let’s just say I definitely wished certain things had gotten fleshed out where other things had instead. Aside from that, it was a pretty solid 4-star read for me. I really liked the idea behind the plot, even if it was very far from what I was expecting (seriously, the title and cover art are pretty misleading), and I was excited to continue on as soon as I was done the first book.

The rest of the series, though? Well. I’ll write reviews for those, too, so you can see how that goes. Hex Hall still reigns champion as my favorite series from Hawkins, but I didn’t hate the rest of the books.