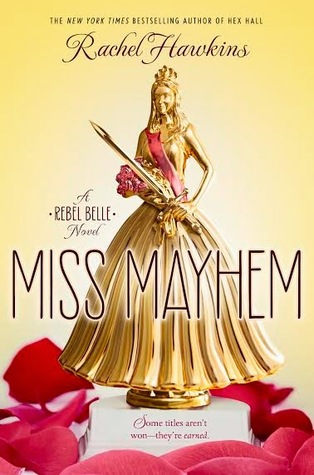 Remember how I said in my review of Rebel Belle that I’d review the other books in this series? It only took me nearly a year, but here we are!

Yet again, the first thing I have to say about this series is that Hawkins has one of my favorite writing styles, and that’s really what struck me in this second book, which, honestly, might err more on the 3.5 star side than a true 4 star. Despite my love for Hawkins’ writing, this second installment in the series does suffer some from the dreaded second book slump … but not as horribly as it could have! (I’ve read some real bad second book slump books, like, oof. Miss Mayhem wasn’t fantastic in the second book department, but it wasn’t horrible.)

I still loved Harper the most out of everything that happened in this second book and, to avoid spoilers, her attitude towards everything actually ended up being my favorite aspect if only because of how she is as a character, and how little she really strays from that notion of herself. Harper is Harper is Harper, and I think that was just the best part.

I did have to knock that star (and a half) off, though, also because Harper is Harper is Harper. Again, second book slump, don’t expect a hell of a lot out of it. I just maybe expected a little more than I got. I did still love a lot of the interactions between the characters (some more than others … COUGH), but, being teenagers, they did have their teenager moments, and maybe I’m getting a bit crochety in my old late twenties (that’s a joke — kind of), but I can only take so much teenage melodrama before I’m itching to shove them back into battle and watch shit fly.

Thankfully, that’s basically how these books go, as they’re about school kids learning to battle like Paladins and Oracles and whosawhatsits, to put it pretty badly. No spoilers, but we’ve got basically the same pacing as the first book, so if you’ve read that, you know what’s coming.

All in all, not a terrible book, really, but I gotta say it had a stronger start than this second book was able to live up to, and … well, since I’ve already read the third book at the time of writing this review, I have some THINGS to say about the third book.

(Not that they’ll really be in the review when it comes, because BIG SPOILERS, but I’ll most likely be ranting vaguely where I can. So, you know. Be ready for that.)